last night i watched The Diving Bell and the Butterfly…which, by the by, is easily one of the best movies i’ve ever seen…it’s the true story of Elle Magazine editor Jean-Dominique Bauby who suffers a massive stroke, leaving him mentally aware but completely paralyzed with the exception of his left eye. he literally blinks out his memoir. it’s amazing. 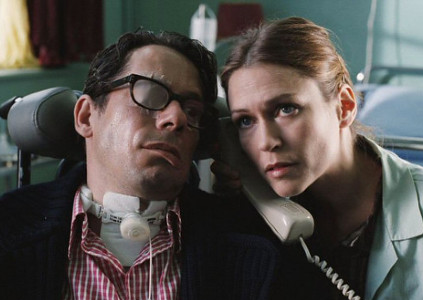 (ps. i tend to use the word ‘literally’ when i really mean ‘figuratively’…my boss AND Kristin AND Ted Mosby would not be happy to know i do this. but in this instance, he did LITERALLY blink out his memoir. hooray for good usage…ahem. moving on)

(no..i guess i did that wrong. again. seriously. this is what i get PAID to do. ha!)

so, after i finished watching the movie and the husband left for hockey (at 10:30. pm. canadian men are CRAZY) i was supposed to be packing for blogher…but i received an unexpected facebook message from a friend, and spent the entire night up, first im’ing with her and then re-reading my senior yearbook cover to cover.

â€œiâ€™ve never had friends like i did when I was 12, jesus does anyone?” – Stand By Me

when asked “what were you like in high school?” celebrities always answer the same way…i was a giant dork. i was ugly. i was incredibly unpopular. high school was rough for me. and , obviously, you just know that someone is lying. there are people who loved high school.

and i’m one of them.

sure, looking back, i was chubbier than i am now, and spent two years with horrible bangs and when i finally grew them out i dyed my own hair and instead of red, it came out purple. just in time for my senior photo. (fabulous) and the fashion? can we not talk about the fashion?

nothing was more mortifying than showing up to school one day in your new gap vest (yes, it was a vest. and it was plaid. and it was god-awful) only to find that your 113-year-old English teacher is wearing the exact. same. one.

the four of us. we were quite the posse (at least that’s what THEY called us back then. ‘the posse‘)

but the memories we made. they are still funny. like the time we wandered the streets of Boston trying to find a place that didn’t exist (Bontempo road?). and the time Eytan called Becca a ‘porker’ in the library. like discovering the Frappuccino. like the time we went to the Jerry Springer show and saw the REAL 911 EMERGENCY. like the time i cut ALL of Becca’s hair off. like the time we smashed my jeep on the way home from the Cranberries concert. like the fact that we tried to teach ourselves a foreign language by using Encarta. like the time that Vlad stole me a pair of bowling shoes….the music, the movies, the bowling (what? we are from Chicago…we bowled a lot), the mix tapes, the boys, the concerts, the shopping. the memories.

memories of a lifetime.

i just wish that the three of them were still in my life the way they were then. one is in New York. two are in Chicago. We are all doing different things. We are married. We are babied. we are expecting. we are doctors and speech therapists and writers. we are religious and not religious. i think of them a lot. and i miss them.

last night was like a little gift. a gift of memory. one of the only things that Jean-Dominique Bauby had left. his imagination, his memory, and his eye. it’s an important one…MEMORY. i’m thankful. and i think i’ll shall blink me out a memoir one of these days.

« life with Emily…*sigh*
met on the internet »